Originally from Ireland, Ninette de Valois (1898-2001) may be regarded as the founder of English classical ballet. She trained with Cecchetti and started her career as a dancer in Diaghilev’s Ballets Russes. In 1926 she established her own ballet school, which gave way in 1931 to the VicWells Ballet in 1931, later becoming the Sadler’s Wells Ballet and finally the world-famous Royal Ballet, of which she was the director until 1963.

Dame Ninette de Valois combined classical ballet and modern works in her programmes. She had a powerfully formative influence on ballet leaders, inspiring many dance teachers and founding various ballet schools in Turkey and Ireland. She influenced such dancers as Margot Fonteyn, Frederick Ashton and Robert Helpmann. Great dancers were invited into her dance company, such as Rudolf Nureyev, Moira Shearer and George Balanchine.

Ninette de Valois used her half of the Erasmus Prize to support various ballet schools. She also made three grants available for two young dancers and a choreographer of the Ankara State Ballet, which she founded. 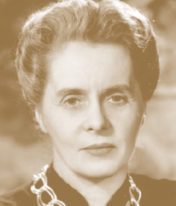