To mark the 25th anniversary of the Praemium Erasmianum Foundation in 1983, four Erasmus Prizes were awarded this year. The recipients were Raymond Aron, Sir Isaiah Berlin, Leszek Kolakowski and Marguerite Yourcenar. Raymond Aron died shortly before the award ceremony.

The French sociologist, political philosopher and journalist Raymond Aron (1905-1983) was born in Paris. He attended the École Normale Supérieure, where among his fellow students were Jean-Paul Sartre and Simone Weil.

In the early 1930s, as National Socialism was on the rise, he spent a year studying in Germany, which turned out to have a great influence on his philosophical and sociological ideas. During the war he was in London as editor of La France Libre. After the war – since 1970 as Professor at the Collège de France – he was strongly involved in journalism as a political commentator for Le Figaro and L’Express.

Raymond Aron showed with his methodological, sociological, polemological, philosophical and journalistic work that dogmatic egalitarianism leads to tyranny rather than equality. Unlike his intellectual contemporaries, among them Sartre, Aron was strongly opposed to political ideologies such as communism and Marxism. He emphasized the lasting value of pluralism and the search for ‘le juste milieu’.

Apart from penetrating studies, articles and sharp weekly reviews of current political themes, he wrote more than forty books, among them Penser la guerre, Clausewitz (1976). These made a major contribution to the philosophy of history.

Mme Aron and Leszek Kolakowski donated their prizemoney to the ‘Fondation pour une entraide intellectuelle européenne’ to be used for travel grants for Eastern European writers, scholars and artists. 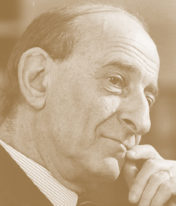