Theme: Design for the Public Domain

The 2006 Erasmus Prize was awarded for ‘Design for the Public Domain’, as in the domain of politics, government and the common good. French designer Pierre Bernard consistently worked only for clients in these sectors.

Pierre Bernard (1942-2015) was born in Paris. After graduating from the École Nationale Supérieure des Arts Décoratifs in 1964, he received a scholarship to study the art of the poster under Henryk Tomaszewski at the Academy of Fine Art in Warsaw. He completed his studies at the Institut de l’Environnement in Paris in 1971.

Bernard was one of the founders and leading lights of the design collective Grapus. Grapus began in Paris in the 1960s and soon developed a unique and recognizable style with a clearly social character. After the disbandment of Grapus in 1990, Pierre Berhard had his own studio, the Atelier de Création Graphique in Paris. Bernard worked for the National Parks of France, the Louvre and the Centre Pompidou, and for many other smaller cultural and social organizations. He used graphic design as tool for communicating his involvement with the client, thus encouraging the observer to take part in and reflect upon the project.

Bernard was convinced that constant attention for a design’s quality not only results in a clearer message but also makes a cultural contribution that is a collective enrichment of society.

Pierre Bernard used the prizemoney to document the work and archive of Grapus. 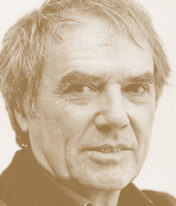