In 1975 the Erasmus Prize was shared by Willem Sandberg and Professor Ernst Gombrich.

Willem Sandberg (1897-1984) was director of the Stedelijk Museum in Amsterdam from 1945 to 1962. He was awarded the Erasmus Prize for his exceptionally original and often daring policy, establishing links between fine arts, applied arts, architecture, film and music. Sandberg introduced the public to experimental schools and artists that could be seen as representatives of new movements in society, making the museum a world-renowned artistic centre, and inspiring modern art as a whole with his recurring themes of vitality, creativity and experimentation. By exhibiting and compiling the many aspects of contemporary creativity (industrial design, photography, typography, graphic design), he spurred on the field of modern art and promoted interaction between the public and the art of that time.

Sandberg played an important role in the Dutch Resistance during the Second World War and demonstrated a strong sense of social engagement. After leaving the Stedelijk Museum, he worked on the construction of the Israel Museum in Jerusalem.

Willem Sandberg dedicated his half of the Erasmus Prize to the project ‘Jerusalem Programme in Art and Science’, which aimed to facilitate the convergence of science and the arts. 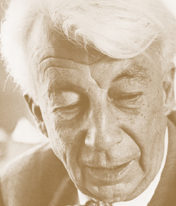