In 1965 the Erasmus Prize was shared by Charles Chaplin and Ingmar Bergman, representing the early years of cinema and the current art of film. Chaplin was awarded the Erasmus Prize for his extensive and universally appreciated oeuvre, which made a great contribution to the development of the cinema from an industry into an art. All his films are marked by their masterly poetic blend of seriousness, humour, and strong social compassion.

Charles Spencer Chaplin was born in England in 1889, the son of theatre and variety artists. At an early age, he appeared on the stage in London and went on tour in Europe. In 1910 he left for the USA, where he founded his own studio. Chaplin was the scriptwriter, director, leading actor, and often also the composer, of almost all his films. He left the USA in 1952 as a result of the political climate (McCarthyism), and settled in Switzerland, where he died in 1977.

Sir Charles Chaplin became world famous for his creation of Charlie the Tramp, the vulnerable little man who struggles to survive in the world of money and power. He always remained the representative of the delicate balance of collective and individual values, of the absolute and the relative, the serious message and comic relief. His most influential silent films include The Kid (1921), The Gold Rush (1925), and City Lights (1931), and some of his most prominent spoken films are: Modern Times (1936), The Great Dictator (1940), Monsieur Verdoux (1947) and Limelight (1952).

Charles Chaplin devoted most of his prize to the Emmaus Community of Abbé Pierre. The then Chairman of the Praemium Erasmianum Foundation, A. Engel, presented a sum of money to the Abbé Pierre at the headquarters of the community, situated in the small Dutch town of Haarzuilens. The rest of the money was made available to the Netherlands Film Academy, to make a film about international children’s theatre. 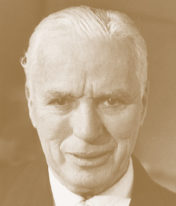