‘To create an environment according to the human scale, not to adapt man to an environment that subordinates human standards to economic ones.’ This is the guiding principle in the work of Hans Scharoun.

Hans Scharoun (1893-1972) was 25 when Bruno Taut saw in him one of the visionary designers who could provide post-war Europe with renewal. The socialist Scharoun did so by constantly taking human behaviour as the basis for his architectural conceptions. He saw city planning and architecture as two concepts which he united in one activity: spatial architecture. Through his integral handling of form and symbolic content, he developed buildings whose space is experienced by users as an expressive element, and as space for free development. His most famous creation, the Philharmonie in Berlin (1957-1963), represents the realization of this aspiration.

Hans Scharoun studied architecture in Berlin. He first worked in Breslau (known today as Wroclaw) before establishing his own practice in Berlin. His house on the Weissenhof Estate in Stuttgart (1927) is famous, as is the Siemensstadt housing project he co-designed in Berlin (1930). Scharoun did not work during the years of the Nazi regime. In 1945 he became head of the Building and Housing Department, overseeing the reconstruction of Berlin. The division of the city made this an impossible task. In 1946 he became professor of architecture at the Technische Universität in Berlin. Well-known works include the Romeo and Juliet apartment buildings in Stuttgart (1954-1959), the Geschwister Scholl Gymnasium in Lünen (1956-1962), the German Maritime Museum, the Scharoun Theatre in Wolfsburg, and the State Library in Berlin.

Hans Scharoun died before he could choose a use for his Erasmus Prize. In consultation with his widow, it was decided to use the money for the Scharoun publication being prepared at that time by the Akademie der Künste. This book, entitled Hans Scharoun. Bauten, Entwürfe, Texte, was published in 1974 and provides a comprehensive overview of his oeuvre. 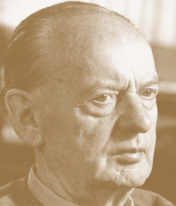