‘Religion and Modernity’ was the theme of the 2004 Erasmus Prize. With the award the Foundation wanted to demonstrate the multiplicity of views of modernity and people with different religious backgrounds, both in Europe and in Islamic countries. The choice of three laureates reflects the fact that issues of religion and modernity can be approached in many different ways. The three Islamic thinkers provide a sample of the many routes that can be taken. One of those thinkers was Sadik Jalal al-Azm.

The Syrian philosopher Sadik Jalal al-Azm (1934-2016) was born in Damascus into a prominent Sunni family. He studied in Beirut and in England, and taught modern European philosophy at the University of Damascus from 1977 to 1999. He was later affiliated with various universities in the United States and Europe as a visiting professor.

Sadik al-Azm rose to international prominence with his 1968 book Al-Nakd al-Dhati Ba’da al-Hazima (‘Self-Criticism after the Defeat’), in which he analyses the disillusionment of Arabs following the Six-Day War. Since the 1969 publication of Naqd al-Fikr al-Dini (‘A Critique of Religious Thought’), Al-Azm has been one of the most prominent secular thinkers in the Muslim world.

Humanist, Kantian and Enlightenment traditions were among his major sources of inspiration. He did not shrink from intellectual and political debate about the content and meaning of Islam and the relationship between Arab and Christian cultures. His defence of Salman Rushdie was not appreciated in many circles.

In his work he often compared expressions of Islamic and Christian fundamentalism. He reached the conclusion that modernity in the end will have the same result in both cases: religion will be driven out of the public domain and will become a personal matter. Sadik Al-Azm passed away at the age of 82 in Berlin. 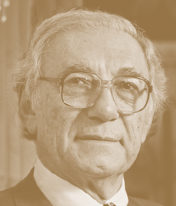