Historical figures play an important role in the work of the writer Marguerite Yourcenar (1903-1987), originally from Brussels. Her powers of empathy enabled her to go back into the past. By using historical figures, she made clear the unique but at the same time universal qualities of the individual in time, as demonstrated in her best-known books: Alexis ou le Traité du vain combat (1929), Mémoires d’Hadrien (1951) and L’Oeuvre au noir (1968). She was also able to explain her fundamental humanist belief in the unchanging nature of man.

Marguerite Yourcenar grew up in France and moved to the United States in 1939. She established her name not only as a novelist but also an essayist, dramatist and translator. In 1980 Marguerite Yourcenar was admitted to the Académie Française – the first woman to receive that honour.

Marguerite Yourcenar donated her portion of the Erasmus Prize to the World Wildlife Fund in the United States. 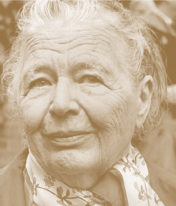