In 1966 Herbert Read shared the Erasmus Prize for art history with René Huyghe. Sir Herbert Read’s influential and constructive criticism greatly advanced the understanding and appreciation of modern art. His passionate social engagement and unflagging dedication to making art accessible to all inspired the Foundation to award him the Erasmus Prize. In advocating creativity in education, he had an undeniable impact on the harmonious development of young people.

Art historian, critic, author and poet Herbert Edward Read (1893-1968) was born into a farming family in Yorkshire. He read law and economics at Leeds University, was curator at the Victoria and Albert Museum in London from 1922 to 1933, and later taught at the universities of Edinburgh, Liverpool and London. He wrote for The Burlington Magazine from 1933 to 1939.

Sir Herbert Read spent his life fighting with his pen for his ideals. He formulated one of those ideals in the following words: ‘Art must rule our lives so that we should be able to say: There are no more works of art, but Art alone. For then art is the way of life.’ In many publications based on this assumption, he therefore endeavoured to express in words the essence and meaning of art. His most acclaimed works include: The Meaning of Art (1931), Art and Society (1937), Education through Art (1943) and Icon and Idea (1955).

Sir Herbert Read wanted his share of the Prize to be used to organize an annual lecture on ‘Unity in European Art’ to be given at the Institute of Contemporary Arts in London for a period of ten years. The lecturers included Peter Hall, Helen Vlachos, Melina Mercouri, Octavio Paz and Edward Goldstucker. 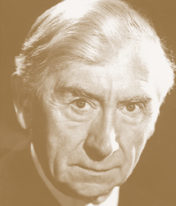