The theme of the fortieth anniversary of the Erasmus Prize in 1998 was ‘Experience and Expectation’. This theme has played a role in the work of both laureates: Mauricio Kagel and Peter Sellars.

The Erasmus Prize was awarded to the Argentinian-German composer, conductor and director Mauricio Kagel, because he has shown with his work that it is essential for us to break out of our listening habits and automatic appreciation if our musical heritage is not to become atrophied. Communicating with the audience was of the utmost importance to Kagel.

Mauricio Kagel (1931-2008) was born in Buenos Aires, where he studied the history of literature and philosophy. He started to compose music in 1950. Thanks to a scholarship, he was able to travel in 1957 to Cologne, where he would remain until his death. Mauricio Kagel has taught modern music at various universities in Europe and America. From 1974 to 1997 he was professor of modern musical theatre at the conservatory in Cologne.

He was the leading representative of ‘instrumental theatre’, which features musicians who not only play instruments but also act. Kagel’s work features many crossovers, combining his musical message with film, visual art, dance and audiovisual elements. With his bizarre, highly imaginative and original compositions, he transcended traditional boundaries between the arts and linked the past and present. This approach – irreverent, non-dogmatic and satirical – forces us to think about music and its social significance. 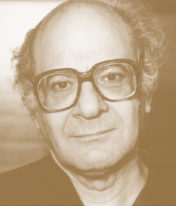