Romano Guardini (1885-1968) was one of the most important cultural philosophers in Christian humanism, a worthy successor to Erasmus himself.

Guardini was a priest, theologian and philosopher; although he was born in Italy, he lived and worked in Germany all his life. He was ordained as a priest at the age of 25. His first major work, Vom Geist der Liturgie (The Spirit of the Liturgy), was published in 1918. It would have a major impact, extending all the way to the Second Vatican Council. Romano Guardini lectured on Catholic philosophy and other topics in Berlin until the Nazis
forced him to resign. After the war, he was a professor at Tübingen and Munich.

In his work and his writings, Guardini sought ways for man to adopt a new attitude in his relationship with God. Seeking to reconcile Catholicism with modern culture, he published countless writings on the philosophy of religion, the liturgy, didactics and ecumenical teachings. He was also well-versed in many other areas, such as psychology, literature and art. His versatile range of expertise allowed him to make significant contributions to the development of European spiritual life. Romano Guardini died in 1968, in Munich.

Romano Guardini allocated his Erasmus Prize to the project Lexikon der Philosophie, making it possible to embark on a new edition of the Encyclopedia Filosofica. 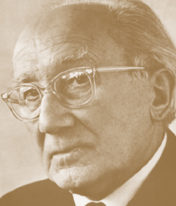