The Erasmus Prize was awarded to the French cultural anthropologist Claude Lévi-Strauss for his penetrating and original research on and keen analysis of human behaviour and expression, in both primitive and advanced societies.

Claude Lévi-Strauss (1908-2009) studied law and philosophy at the Sorbonne in Paris. In 1935 he departed for Brazil, where he taught philosophy at the university in São Paulo and studied indigenous civilizations. His inspiring and poetic book Tristes Tropiques (1955) describes the life of the indigenous Brazilian tribes.

On the basis of the correspondences Lévi-Strauss had discovered between allied patterns of behaviour, myths and forms of artistic expression, he claimed to have discovered a fundamental cultural infrastructure containing the basic rules of every society. His structuralist theory greatly influenced European thought, as well as such philosophers as Roland Barthes, Michel Foucault, Jacques Derrida, Pierre Bourdieu and Jacques Lacan. Structuralism was a starting point for many younger researchers in their search for new forms of society.

From 1959 on, Professor Lévi-Strauss worked at the Laboratoire d’Anthropologie Sociale of the Collège de France. Well-known works by Lévi-Strauss include La Pensée Sauvage (1962), an investigation into man’s thought in his ‘natural state’, and into the myths of mankind. His fourvolume work Mythologiques (1964-68) probes the deepest irrational and mythical roots of human society.

Claude Lévi-Strauss used his prize money to finance the project of a group of young researchers: an ethnological study on family ties in European society. Special attention was paid to Lorraine and Burgundy (France), the Valais and the Engadine (Switzerland), Catalonia (Spain) and Trentino (Italy). The results were published in Études Rurales, 1979, no. 73-76. 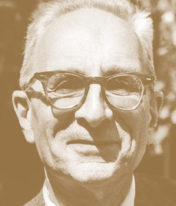