In 1986 it was 450 years since Erasmus died in Basel. The commemoration was combined with the award of the Erasmus Prize to Václav Havel in the St. Laurenskerk in Rotterdam. The laureate was absent. Havel thought that the political circumstances in Czechoslovakia and his dissident status made it unwise for him to leave his country. He was represented by the chairman of Charta 77, František Janouch, and the actor Jan Tríska, and many friends and émigré dissidents attended.

Václav Havel was born in Prague in 1936. After the communists seized power in 1948, Havel was unable to study. He earned his school diploma in the evenings while working as a laboratory assistant. In 1955 he began to write and publish articles. In 1960 he became a stage hand at the Balustrade Theatre (Divadlo Na zábradlí), where he later became literary adviser and where his first play, Zahradní slavnost (1963, The Garden Party), premiered.

After the suppression of the Prague Spring in 1968, Havel was banned from the theatre and turned his attention increasingly to criticizing the state’s undemocratic procedures. His books were banned in 1971 and could only circulate underground.

Václav Havel, Jan Patocka and Jirí Hájek became the first spokesmen for Charta 77 on 1 January 1977. From 1979 to 1983 Havel was imprisoned for undermining the state. He continued writing, however, and in 1989, after the fall of the Berlin Wall, he played a major role in the Velvet Revolution. That same year, Havel was elected President of Czechoslovakia, an office he held until 2003. Havel’s celebrated works are Vyrozumění (1965, The Memorandum), Moc bezmocných (1978, The Power of the Powerless), Dopisy Olze (1983, Letters to Olga), Largo desolato (1984), Living in Truth (1986) and To the Castle and Back (2007).

Václav Havel received the Erasmus Prize because he remained true to his conscience and spoke out with great courage against the dangers that threaten liberty and peace between countries. He died in 2011.

Václav Havel donated his prize to the international office of Charta 77 in Stockholm. 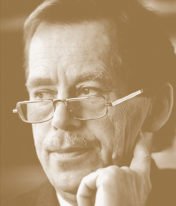