The subject of the Erasmus Prize in 1979 was journalism, since the freedom of the press is one of the most important fundamental rights of our democratic society. The printed word, in widely differing newspapers, mirrors the multiformity of that society. The press is, moreover, better able than the spoken word to supply detailed and probing information, which the reader can absorb at his or her own pace whenever he or she wishes.

Two quality newspapers were chosen as prizewinners: the Swiss daily Neue Zürcher Zeitung, founded in 1780, and the then fairly new German weekly Die Zeit, first published in 1946. The prize for the Neue Zürcher Zeitung was accepted by Dr F. Luchsinger, chief editor, the prize for Die Zeit by Countess Marion Dönhoff, the paper’s co-founder and publisher.

The Neue Zürcher Zeitung was awarded the prize as one of the oldest independent newspapers distinguished by a many-sided news service, adverse to sensation and accompanied by detailed and searching comment.

Die Zeit because in post-war Germany it emerged as one of the first free press organs, and developed into an authoritative independent weekly paper of high quality, with space for a diversity of opinions. Die Zeit has played an important role in facilitating freedom of opinion and the process of democratization within the German Federal Republic.

The Neue Zürcher Zeitung used the Erasmus Prize to publish a book to commemorate the 200th anniversary of the newspaper in 1980.

Die Zeit used the money of the Erasmus Prize to support young journalists from communist and Third World countries to practice their profession. 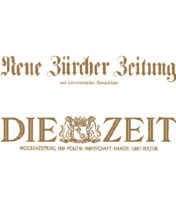