Along with Marc Chagall, Oskar Kokoschka received the Erasmus Prize in 1960.

For half a century, Kokoschka (1886-1980) devoted himself to the renewal of painting by embracing a figurative expressionist style. He rejected the harmonious ideals of Italian Classicism in favour of an expressionism inspired by the Gothic, in which fantasy and reality merge. He was a great colourist. Oskar Kokoschka was one of those artists with the gift of depicting the innermost being of objects and people, revealing them to others with great delicacy, yet very persuasively. His writings emphasized ‘the art of seeing’. His sense of liberty, which he also expressed in his written work, made him an inspiring example to others.

Oskar Kokoschka was born in Austria in 1886, but became a British citizen in 1947. He studied under Gustav Klimt at the Kunstgewerbeschule in Vienna. He contributed to the periodical Der Sturm, and in 1912 he took part in the second exhibition of the ‘Blaue Reiter’ art movement. After the First World War, in which he was severely wounded, he taught at the art academy in Dresden. In 1938, he fled to London where he painted many antifascist works. From 1954 to 1962, he organized the ‘Schule des Sehens’ summer academy at Salzburg. Oskar Kokoschka died in Switzerland.

Oskar Kokoschka used his Erasmus Prize to produce a book about his friend Adolf Loos. Published in 1964, Der Architekt Adolf Loos presented a new survey of the work of this Austrian architect, who designed and constructed widely acclaimed buildings in the first quarter of the last century, working chieflyin Vienna. 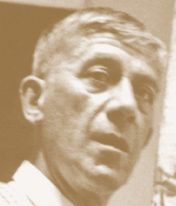