The common denominator of the Erasmus Prize for the statesman Robert Schuman and Professor Karl Jaspers was their vision for the future of Europe.

Robert Schuman will be remembered as the founder of what was to become the EEC and the European Union due to his initiative in forming the ‘Coal and Steel Community’, the first European body with supranational decision-making powers. He waged an unceasing and visionary struggle for a new and united Europe. Schuman’s proposal, which became known as the Schuman Plan, was launched on 9 May 1950 and developed by Jean Monnet. The plan entailed bringing French and German steel production together under a comittee that other European nations could also join.

Born in 1886, Robert Schuman was a German citizen until 1919; he then took French citizenship. He studied law in Germany but became a member of the French parliament in 1919. In 1940, when he was Undersecretary of State for refugee affairs, he became involved in the Resistance, and was imprisoned by the Germans. After the Second World War, he occupied a number of ministerial posts, and was Prime Minister of France in 1947-48. From 1958 until his death in 1963, he was a member, then chairman and finally honorary chairman of the European Parliament, an institution whose foundations he himself had laid.

Robert Schuman and Karl Jaspers used their Erasmus Prize for a Seminarium Erasmianum. It was held at Noordwijk in 1962, in conjunction with the Europa Institute of Leiden University. The aim of the seminar was to facilitate in-depth debate between two generations of scholars regarding Europe’s contribution to a developing world. 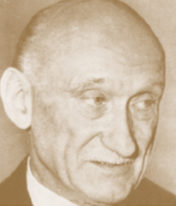