‘We need history to be able to imagine our own identity and that of the other,’ Swiss historian Werner Kaegi once said.

Werner Kaegi (1901-1979) studied in Zurich, Florence, Paris, Leipzig and Basel. In 1924 he presented his doctoral thesis on Von Hutten and Erasmus. He was a professor in Basel from 1935 to 1971. As early as 1928, he translated Johan Huizinga’s biography of Erasmus into German. During a stay in Italy, Kaegi experienced a growing interest in the Renaissance and in nineteenth-century historians such as Michelet and Burckhardt. In the ‘Gesamtausgabe’ of Burckhardt’s works (1928-1939), Kaegi was responsible for the critical edition of Kultur der Renaissance in Italien. His masterpiece, however, was the seven-part scholarly biography on Jacob Burckhardt. Kaegi’s study provides a clear insight into the problems that concerned Burckhardt, combined with a profound knowledge of European culture in the nineteenth century.

Published in 1932 and 1936, Kaegi’s Historische Meditationen consider political themes within an historical perspective. Kaegi’s most important field of study was the history of ideas and the historiography of the Middle Ages, modern times, the Enlightenment and the nineteenth century. He very acutely demonstrates what accounts of the past were given in various periods. Kaegi was a typical representative of the old classical humanist European tradition, for whom true humanity meant a conversation with the cultural élite of all times and all countries.

Werner Kaegi, a leading expert on Johan Huizinga, used his Erasmus Prize to fund what he referred to as the ‘Huizinga Prize’. Over the course of ten years, promising history students at Dutch universities were awarded a prize for their doctoral theses. 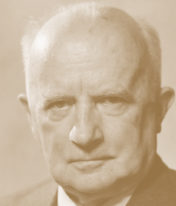