Massimo Pallottino (1909-1995) became Inspector for the Soprintendenza alle Antichità di Roma and Director of the Museo Nazionale di Villa Giulia in 1933. On the basis of his fieldwork and publications, he was appointed in 1946 to the first chair in Etruscology at the University of Rome, a post which he held until 1980. All his life he studied the culture, religion and language of the Etruscans and the preRoman peoples of Italy. Thanks to his pioneering work, Etruscology is now an independent field with its own institute and journal: the Istituto Nazionale di Studi Etruschi e Italici, and Studi Etruschi. Between 1945 and 1956 he was editor of Fasti Archaeologici, a unique bibliographic work of reference.

Pallottino’s important excavations at Cerveteri, Tarquinia, Veii and Pyrgi, in addition to his many publications and his lectures at the universities of Rome and Perugia, have also made the history and art of the Etruscans accessible to a wider audience. The question of the origin of the Etruscans interested him less than the culture as a whole which was discovered.

Respect for the traces of the past was his basic principle. As one of the founders of the International Association for Classical Archaeology, he worked on many different European commissions for the preservation of the cultural heritage. Pallottino had enormous influence, not only in the field of Etruscan studies but also in Italian and European archaeology as a whole.

Professor Pallottino used his portion of the Erasmus Prize as a contribution to an exhibition and its catalogue: Nieuw licht op een oude stad. Italiaanse en Nederlandse opgravingen in Satricum. This exhibition, held at the Rijksmuseum van Oudheden in Leiden in 1985-86, presented a survey of the research findings on the Italic city of Satricum. 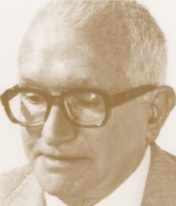