The Erasmus Prize in 1978 was dedicated to puppet theatre, an art form that so clearly manifests the magic of the theatre. Four important groups of puppeteers representing four main streams of this art form were awarded with the prize: Marionettistica Fratelli Napoli, Yves Joly, Tăndărică and Bread and Puppet Theatre. The many performances given in collaboration with the Holland Festival after the presentation offered a large audience the opportunity to become acquainted with the prizewinners.

The Fratelli Napoli from Catania in Sicily, founded in 1921, presents stories of Charlemagne and his struggle against the Saracens, with such heroes as Orlando Furioso; other performances are based on Shakespeare or the Japanese Nõ theatre. They make use of techniques that are centuries old, and make their own rod puppets; their performances are a form of popular theatre full of Sicilian melodrama.

The Frenchman Yves Joly was the heart and soul of the ‘Théâtre de Papier’. He used very simple means and a refined and intimate play with his hands to express individual human emotions, reducing the puppet theatre to its simplest form.

The Romanian group Tăndărică, established in 1945, has a very broad repertoire based on world literature. Tăndărică has developed a colourful and imaginative theatre that has had a fertile influence on post-war puppetry. The company also produced street theatre after 1973.

Peter Schumann, born in Silezia and educated in Germany, emigrated to the United States in 1961, where he founded his politically radical Bread and Puppet Theatre in New York in 1963. Started as street theatre, his group, which includes human actors, approaches the visual arts, with occasionally grotesque effects and magical-realistic atmosphere.

Each of the four prizewinners devoted its share of the prize to their own company. 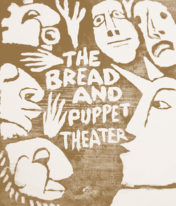