In 1972 the Erasmus Prize was awarded to the Swiss developmental psychologist Jean Piaget. He conducted pioneering research into the mental world of children and the origin and development of conceptual capability.

Jean Piaget (1896-1980) studied biology, but became fascinated by philosophy during his studies, primarily focusing on theories of knowledge. He was a professor of psychology at the University of Geneva from 1929 to 1975. Piaget conducted research on models of intellectual development. His studies showed that children have their own unique cognition, which develops according to progressive stages based on biological maturation. His theories on the structure of thought and on the logical capacity for cognitive operations were seminal.

Piaget’s study of intellectual development has had a huge impact on education, especially primary education. His work has also been influential in the types of support provided to children who have physical and mental disabilities.

Genetic epistemology – the study of the sociogenesis, history and psychological origins of how knowledge is developed – is the main research topic at the Centre international d’Epistémologie génétique in Geneva. Jean Piaget founded the Centre in 1955 and he was its director until his death.

Jean Piaget devoted half of his prize to his foundation, the Centre international d’ épistémologie génétique in Geneva. The funds were used for a study on the process of abstraction and generalization in scientific thought. 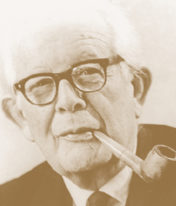