The political philosopher Isaiah Berlin (1909-1997) played a crucial role in the intellectual life of Europe. A brilliant mind, he was still young when he became a Fellow of All Souls College in Oxford, the first Jew to hold that position. During the Second World War he worked at the British embassy in Washington, followed by a brief period at the Moscow embassy in late 1945. He then lived in Oxford and held various positions in British university and cultural life.

Berlin’s most important philosophical work concerned the history of ideas, which he considers as understanding the origins of, and shifts within, the fundamental conceptual models that determine our view of man and culture. His main interest was the Enlightenment – and its critics – and the Romantic period.

In his writings he has been a tireless defender of pluralism in ethics, politics and aesthetics and the ‘liberal values’ by opposing monistic thought systems. He has also been deeply concerned with dissidents in the past, as shown in his works on Vico and Herder, and in his collection of essays Against the Current and Russian Thinkers. His inaugural speech in 1958, Two Concepts of Liberty, in which he distinguishes between ‘positive and negative liberty’, has had a great influence on the debate on liberty and equality.

Isaiah Berlin donated his half of the Erasmus Prize to the Writers & Scholars Educational Trust in London. The money was a gift to the Index on Censorship. 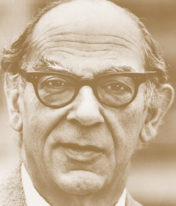