The conductor Nikolaus Harnoncourt and the organist and harpsichordist Gustav Leonhardt received the Erasmus Prize in 1980. Both laureates were deeply involved with the music of the past, notably with the interpretation and performance of music of the Baroque. Through the study of period instruments, scores and historical sources they have reached a new vision of the interpretation of Baroque music. Their performances have become a model for the interpretations of other performers of the music of the 17th and 18th centuries, the Baroque and early-Baroque. Notably the cantatas of Johann Sebastian Bach and the musical dramas of Claudio Monteverdi have been made available to a wide public through the performances by Harnoncourt and Leonhardt.

Gustav Leonhardt (1928-2012) studied the harpsichord, organ and musicology in Basel. As harpsichordist he made his first appearance in Vienna, where he also started teaching. He was Professor of Harpsichord at the Amsterdam Conservatory and organist at De Nieuwe Kerk in Amsterdam. He is a specialist in the harpsichord work of Johann Sebastian Bach, but Mozart sonatas are also on his repertoire. Leonhardt gave concerts all over the world, both as a soloist and with his ensemble Leonhardt Consort. He conducted performances of Monteverdi and Rameau operas. His recording project of all the religious Bach cantatas together with Nikolaus Harnoncourt – it took from 1971 to 1990 to complete – is world-famous. In 1968 he played the role of Johann Sebastian Bach in Jean-Marie Straub’s film Chronik der Anna Magdalena Bach.

Gustav Leonhardt allocated the money from his Erasmus Prize to the Oudezijds 100 Society in Amsterdam. This society in the red light district in the centre of Amsterdam addresses the problem of drug addicts, prostitutes, refugees and the homeless. 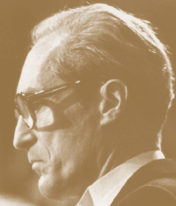