In 1960 the Erasmus Prize focused on the art of painting. Along with Oskar Kokoschka, Marc Chagall received that year’s prize.

Marc Chagall (1887-1985) was born near Vitebsk, now part of present-day Belarus, as the son of a simple RussianJewish warehouse clerk. He attended the art academy in St. Petersburg, and studied for a time with Leon Bakst. An admirer gave Chagall a grant in 1910 to send him to Paris. Four years later, he returned to Russia, where he worked as the art director of the Moscow State Jewish Theatre until 1922, when he travelled back to France. He escaped the persecution of the Jews during the Second World War by fleeing to the USA. Two years after the war ended, he returned to France, where he would remain until his death.

In Chagall’s work, the powerful hand of the artist is at the service of a lyrical practice of art. Stemming from a deep religious sense and the Jewish tradition, and influenced by Russian folk art, he was able to make a completely original contribution to the development of European painting. Chagall brought new life and new forms to the traditional principles of that school of art. In addition to his many paintings and graphic artworks, many international commissions came his way in later life, such as the windows of the synagogue at Hadassah Hospital in Jerusalem (1962), the ceiling of the Opéra Garnier in Paris (1964) and the murals in the Metropolitan Opera House in New York (1966). For Chagall, painting was a form of poetry, or as he himself said: ‘Everything is subject to change in our demoralized world except our hearts, the love of this world, and our striving to experience the spiritual.’

Marc Chagall used his prize to fund a grant that made it possible for young artists to study abroad. 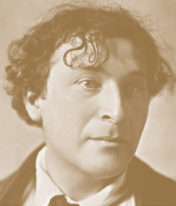