The French composer Olivier Messiaen played an important part in the revival of religious music, due largely to his compositions for organ. His compositions rank among the most authentic expressions of human creativity in the twentieth century.

Olivier Messiaen (1908-1992) developed an early interest in the rhythms of the ancient Greeks and in non-European musical systems, as well as in the sounds of nature. In 1931 he became the organist of the Sainte-Trinité in Paris, a position he held until his death in 1992. He was also professor of harmony and later composition at the Paris Conservatory. Messiaen had a huge influence on younger composers such as Boulez, Stockhausen, Xenakis, De Leeuw and Shinohara.

Messiaen succeeded in an extremely rational way in giving form to his mystical-religious experience, based on an unshakeable Catholic faith, in rhythms of his own invention. Never a user of the twelve-tone system, he experimented with scales based on other elements, such as duration and articulation. Messiaen compositions can always be recognized by the use of synaesthesia (seeing colours when hearing certain harmonies), his transcriptions of birdsong and his need to express deeply religious concepts. Characteristic also is his use of the ‘ondes martenot’, an electronic instrument.

The prize financed a competition for a work for a large symphony orchestra, for young composers. The competition was held in 1973-74. The jury, consisting of Olivier Messiaen himself, Ton de Leeuw, Iannis Xenakis, Györgi Ligeti and Witold Lutoslawski, selected the work Ausa by Davide Anzaghi as the winner. In addition, it financed a performance, at the festival of La Rochelle, of Mau Va Hoa, a piece composed by the runner-up of the competition: Nguyen Thien Dao. 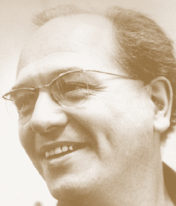