The Erasmus Prize for industrial design was awarded to French designer Jean Prouvé in Rotterdam. On the occasion of the award ceremony, Museum Boijmans Van Beuningen hosted an exhibition devoted to his wideranging work.

Jean Prouvé (1901-1984) was still young when he became acquainted with the traditional and socially engaged environment of the École de Nancy, to which his father, artist Victor Prouvé, was affiliated. Jean Prouvé trained as a smith and craftsman and opened his own studio in 1923. He soon switched from ironwork to designing furniture and constructing houses. Together with Le Corbusier and Jeanneret he was the co-founder of the Union des Artistes Modernes in 1929.

In a visionary spirit he proposed solutions for social housing based on a clear, consistent concept with an eye for technical feasibility and mass production. Prouvé always thought in terms of the integration of architecture and industry. In his work he often applied new materials and succeeded in achieving a combination of modern technology and design. The building components and connecting techniques he developed are particularly skilful and original. In the years 1924-1952 Prouvé became famous for the products from his factory at Maxéville, among them windows, facades, roof panels, items of furniture and prefab buildings. In the years since he worked mainly as an adviser and teacher. The striking facade of the Faculty of Medicine, with its panels designed by Jean Prouvé, is his only architectural work in the Netherlands.

Jean Prouvé decided to use his prize to support the Société d’HLM Emmaüs. This section of the Emmaüs movement in France is concerned with subsidized housing for the needy. The money was used for a study of the construction of pavilions to be built largely of wood for economy reasons. 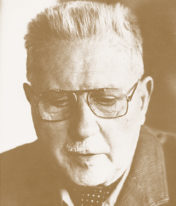