In 1965 the Erasmus Prize was shared by Ingmar Bergman and Charles Chaplin, respectively representing the current art of film and the early years of cinema. Ingmar Bergman received the Erasmus Prize to mark his success at making film a means of expressing important values and problems, giving the composition of his films a distinct personal character. In so doing, he constantly demanded a great deal from the understanding of his audiences. Bergman’s work had a huge impact on the next generation of cinematographers.

Ingmar Bergman was born in 1918 in Uppsala, the son of a preacher. He felt drawn to the theatre; after completing a university education, Bergman succeeded in attaining a leading position as director and theatre manager. In 1944, he entered film as a scriptwriter. The medium appealed to him so much that he went on to direct dozens of films, usually based on his own screenplays.

Bergman was deeply interested in metaphysics and in religious questions. His films forcefully interpret – sometimes by means of disturbing images –the thoughts, desires, beliefs, uncertainties, doubts and ambitions of questing man, so that the viewer recognizes, through a glass darkly, the deep emotions of his own soul.

Ingmar Bergman allocated his share of the Erasmus Prize to grants for young filmmakers from various countries. In the Netherlands a grant was awarded to Adriaan Ditvoorst; in France to Philippe Parrain; in Norway to Paul Løkkeberg; in Finland to Risto Jawa. 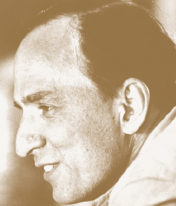