Theme: The cultural significance of the natural sciences

Daniel Dennett (1942) is an American philosopher, author and cognitive scientist, whose research focuses on the philosophy of mind, philosophy of science and philosophy of biology. He is a professor at Tufts University in the United States. Dennett received the Erasmus Prize within the framework of the theme ‘The cultural significance of the natural sciences’.

Daniel Dennett addresses the most fundamental cultural questions of our time, such as: Where do we come from, and what is it that makes us human? But he also writes about such subjects as humour, free will and Bach. To substantiate his philosophical theories, he uses elements from the natural sciences. He has worked on a philosophical theory that integrates biological and cultural phenomena under one overarching, unifying principle, taking Darwin’s theory of evolution as the basis for his worldview.

Dennett writes books and articles about a wide range of subjects, among them Consciousness Explained (1991), Darwin’s Dangerous Idea (1995), Breaking the Spell: Religion as a Natural Phenomenon (2006) and From Bacteria to Bach and Back (2017). With his original and ironic take on the issues he addresses, Dennett succeeds in reaching a wide audience far beyond the borders of philosophy. In his work he builds bridges between various disciplines, he stands firm on the importance of scientific research and shows how the natural sciences have a fundamental impact upon our lives and our future. 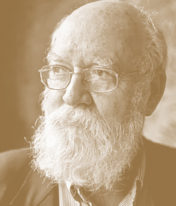