Two eminent jurists, Benjamin Ferencz and Antonio Cassese, received the Erasmus Prize this year for their ‘international prosecution and trial of war crimes and crimes against humanity’. Together – the prosecutor and the judge – they personify the efforts to punish, prevent and eliminate international war crimes.

Benjamin Ferencz was born in 1920 in Austria-Hungary but grew up in New York; his Hungarian-Jewish family emigrated to the United States ten months after his birth. After the Second World War he was appointed to gather evidence of crimes against humanity committed by the Nazis. As a young lawyer, still just 27 years old, he became Chief Prosecutor in 1947-1948 at the Einsatzgruppen Trial in Nuremberg, Germany.

As an engaged citizen he, independently and on his personal initiative, has continuously argued for recognition of international humanitarian criminal law. Benjamin Ferencz has made the prevention of aggression and war the main goal of his efforts and has been the driving force behind the establishment of the International Criminal Court. Under the motto ‘Law, not war’, Ferencz has tirelessly continued to fight for a more peaceful world where justice prevails. 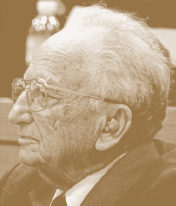