The expansion of the European Union inspired the Foundation to make ‘Cultural Fault Lines’ the theme of the 2001 Erasmus Prize. This referred to the confrontation that takes place whenever boundaries – cultural boundaries in particular – shift. Two individuals were awarded the prize: Claudio Magris and Adam Michnik. The work of both laureates is strongly linked to the turbulent history of Central Europe. Both men have shown us how our perceptions of identity and events can be influenced by changes in the political system or by shifts in geographic borders.

Born in 1946 in Warsaw, Adam Michnik joined nonconformist groups at a young age and became a critic of the communist regime. After studying history, he became involved in the Workers’ Defence Committee, the ‘flying universities’ and the independent trade union ‘Solidarity’. Michnik spent six years in prison.

In his essays he explores the relationship between heroism and treachery, activism and collaboration, and shows how he has mastered the art of compromise and tolerance. He thus provides an example for achieving non-violent change. After the revolutionary reforms of 1989, he became a Member of Parliament. Since 1989 he has been editorin-chief of Gazeta Wyborcza, the newspaper he founded himself, which is now one of Poland’s most influential newspapers.

Like Claudio Magris, Adam Michnik used the essay as his medium to contribute to a more democratic society based on such principles as tolerance and the acceptance of differences. In November 2001 a collection of his work was published in the Netherlands as Uit een belegerde stad. 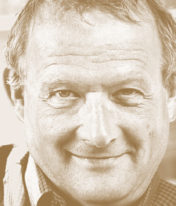