Developments in Europe leading up to the European Union have had consequences for culture in general. But it can perhaps be said that the major economic and political changes have not so much preceded the cultural changes, but rather were the result of the general mood and cultural situation in Europe. In this context, the 1997 Erasmus Prize was awarded to Jacques Delors.

Jacques Delors was born in 1925. After a career at the Banque de France, the Planning Office and the Education Ministry, he became social and cultural affairs adviser in the cabinet of Premier Chaban-Delmas (1969-1972). He was a lecturer at the University of Paris-Dauphine and a member of the European Parliament, and from 1981 to 1984 he was Minister of Economic Affairs and Finance.

From 1985 to 1995, Delors played an important role as chairman of the European Commission. Moreover, in 1992 he became chairman of Unesco’s International Committee for Education. He established Notre Europe, a centre for study and research, and in 2000 he was appointed president of the Conseil de l’Emploi, des Revenus et de la Cohésion Sociale (CERC).

The foundation wanted to reward not only his great achievements in advancing the process of European unity but also his efforts to give culture and education a place in what was then the European Community. During his term as chairman, Delors combined idealism, willpower and vision in order to break through paralyzing impasses. At the same time, he showed a strong social conscience, always stressing individual responsibility and solidarity. 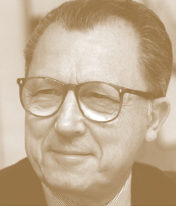