delivered by His Royal Highness the Prince of Orange

Is a peaceful community of states an attainable goal? Can we allow ourselves to dream of a Utopia?
Many will agree that it is desirable to strive for a less violent world, but few believe this ideal can be achieved in our lifetime. The concept of a peaceful community of nations was in fact suggested as long ago as 1795, when Immanuel Kant, in his Perpetual Peace: a Philosophical Sketch, outlined the idea of a league of nations that would control conflict and promote peace between states. Kant argues for the establishment of a peaceful world community in the hope that each state would respect its citizens and welcome foreign visitors as fellow rational beings. A union of free states would promote a peaceful society worldwide, overseen by the international community.
The development of international law resulted in the establishment of the League of Nations by the Treaty of Versailles in 1919. The League’s main purpose was to avoid any future world wars, but ultimately it proved incapable of preventing aggression by the Axis powers in the 1930s. At the end of the Second World War the United Nations replaced the League, inheriting a number of its agencies, and the dream was renewed. In the preamble to its Charter, the ‘peoples of the United Nations’ expressed their determination to combine their efforts to ‘maintain international peace and security’ and ‘to ensure, by the acceptance of principles and the institution of methods, that armed force shall not be used, save in the common interest’.
The emerging international legal order was increasingly based on the notion that perpetrators of heinous crimes should not go unpunished and that there can be no peace without justice. Indeed, the Tokyo and Nuremberg Tribunals after World War II were milestones in the development of international law, focusing on individual criminal responsibility, rather than on state responsibility. Both the Nuremberg and the Tokyo Tribunals applied and developed the concept of international criminal responsibility for crimes under international law, such as war crimes and crimes against humanity. The concept of individual criminal responsibility was taken further in international treaties such as the Geneva Conventions, the Genocide Convention and the UN Convention against Torture.
But after Nuremberg and Tokyo, it took more than forty years and the end of the Cold War for the international prosecution of the most serious international crimes to resume. Starting in the 1990s, several international, or partially international, courts and tribunals were set up by the United Nations or with UN support, such as the Yugoslavia and Rwanda tribunals, and the tribunals for ierra Leone, Lebanon and Cambodia. These tribunals were established to try international crimes in connection with specific situations. By contrast, the International Criminal Court, founded with the signing of the Rome Statute in 1998, which opened its doors in The Hague in July 2002, is the world’s first permanent court. It has potentially universal jurisdiction to try the most serious crimes of concern to the international community.
The importance of international tribunals is evident in the light of the international crimes committed time and again all over the world. But the daily reality of the international courts and tribunals is at times challenging. For instance, to implement their mandates they depend on the cooperation of States.
As peace and justice go hand in hand, the international community should step up its efforts, underscoring its commitment to international justice as a complement to national justice. The international criminal courts and tribunals should be able to function effectively as independent courts, dispensing justice in the interests of peace.

Ladies and gentlemen, the theme of the 2009 Erasmus Prize is ‘Prosecuting and Judging International War Crimes and Crimes against Humanity’. It comes at a time when the Yugoslavia and Rwanda tribunals are moving towards completing their work, when several other courts and tribunals are dispensing international criminal justice and the world community is, more than ever, faced with the need to work together to solve global problems. In this context, we thought it was the right time to focus on the rule of law and the importance of international legal structures.
The prize has been awarded to two eminent legal experts, Antonio Cassese and Benjamin Ferencz. The Praemium Erasmianum Foundation recognises that this year’s two Erasmus Prize recipients are both key figures in the emerging system of universal criminal justice. And both have greatly contributed to it.

Mr Ferencz’s wartime experience has determined his life and the difficult goals he set himself. At the Einsatzgruppen trial at Nuremberg he was chief prosecutor, and brought to justice twenty-two Nazis who had perpetrated war crimes. Afterwards, he directed restitution programmes and assisted Nazi victims seeking compensation for their suffering and losses. He worked as counsel in negotiating reparations between West Germany, Israel and Jewish organisations. The most important part of his mission today is trying to prevent war. He sees war as the greatest evil of all, and has campaigned incessantly to eliminate it. One of his campaigns is to make aggression a crime within the meaning of the statute of the new International Criminal Court. Mr Ferencz has fought all his life to end impunity for the architects and perpetrators of large-scale atrocities and stressed the importance of individual responsibility. His long career spans the work done at Nuremberg and today’s efforts to develop a working, global system of international criminal law. That new institutions, including the International Criminal Court, have come into being is in no small part thanks to his efforts.

Antonio Cassese has played a vital role in developing relevant legal concepts and he helped to create the post-Nuremberg and Tokyo courts to administer international justice. He was a driving force behind the creation of the International Criminal Tribunal for the former Yugoslavia and, as its first President, played a key role in establishing its authority.
During his career Antonio Cassese has performed many roles: he has been a judge on the bench, he led the UN Commission of Inquiry on Darfur, and he has worked as a scholar, teacher, editor, commentator and author of innumerable books and articles. He has a rare talent for grasping the issues of international law. He combines great clarity and command of detail with a focus on practical application of the law. He has become known as a persistent force, who has motivated many of his co-workers and inspired a generation of students. He has acted as the conscience of the International Criminal Court by speaking out on the new and complex issues it faces. Judge Cassese is now once again based in The Hague as President of the Special Tribunal for Lebanon.

Gentlemen, the development of international criminal law is largely the result of your work. With unflagging zeal you have kept interest in universal justice alive and worked for the establishment and recognition of international tribunals. By honouring your efforts with the Erasmus Prize, we wish to express our deep appreciation for your perseverance in the fight for universal justice.
I should like to end my address with a striking quotation from the closing speech made by Benjamin Ferencz at Nuremberg, delivered at the trial where he was the chief prosecutor. Judge Antonio Cassese, as President of the International Tribunal for the Former Yugoslavia, repeated these same words while reporting to the United Nations in 1997. These were powerful words, spoken about men who had committed great atrocities. Prosecutor Ferencz told the court that: ‘Life was their toy and death was their tool, and if these men be immune, then law has lost its meaning, and man must live in fear.’
Gentlemen, we hope that the power of your words and your arguments will remain a source of inspiration for all those who want to see large-scale atrocities punished, and the rule of force replaced with the rule of law.

May I ask you, Mr Cassese and Mr Ferencz, to please come forward to receive the insignia of the prize. 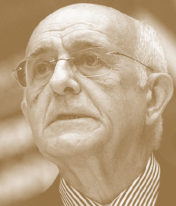