Having said that, I will now turn to the laureates in person. I now turn to our third laureate professor Abdulkarim Soroush.

One of the best-known reformers in Iran is the renowned religious intellectual, Abdulkarim Soroush, who in his own country is both popular and controversial. He tries to combine insights from Western philosophy and social science with a tolerant perception of the Islamic creed. Sometimes he is named ‘the Luther of Islam’.  ‘Erasmus of Islam’ would seem to be a more appropriate title, given Erasmus’ decision not to break with the church as Luther did. When one envisages the conditions in Iran after the 1979 revolution, one cannot but be impressed by Soroush’ well-considered and courageous ideas to reconcile Islam with modern ideas on human rights and democracy.

A broad scholar in many fields, such as pharmacology, history and philosophy of science, he developed a thorough knowledge in the field of Koran interpretation and Persian poetry. His major works attempt to give a new interpretation of the shari’a in the light of new insights in the field of jurisprudence, hermeneutics and sociology of knowledge. We hope that more of his work will become available in Western languages.

Characteristic for Soroush’ thinking is a vision in which he attempts to reconcile the three cultures of Iran: The national tradition, which is going back to times before the introduction of Islam in the eighth century, the Islamic creed, and the Western body of thought. All three are part of the heritage of present-day Iran, according to Soroush, who takes issue with the idea of a pure culture, free of foreign influences. When one thinks on these lines, one has to reject Islam to begin with, because it came from outside Iran. In his view, nothing is entitled to a self-evident devotion just because it has come into existence on one’s own soil, and none of the three cultures which form the richness of Iran must be allowed to dominate: Neither the nationalists, who want to destroy all Arab influences, nor those who blindly wish to imitate the West, nor the unskilled followers of Islam.

In their confrontation with Western civilisation, many Muslims hold on to Islam as an identity that excludes others, according to Soroush. Soroush tries to forge a link between various notions from the social sciences, which in post-revolutionary Iran were condemned as Western corruption, and his thinking about Islam.

All of this sounds similar to the programmes of reformist thinkers within other religions, where a historical interpretation of transmitted traditions with hermeneutic means forms the starting point of a modernisation process. Within the Islamic tradition Soroush goes as far as possible in reconciling religion with democracy: ‘The heart of a religious society is a freely chosen belief; it is not in force and adaptation.’ 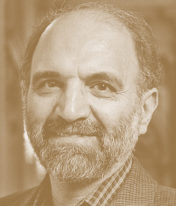 back to Introduction
continue to Acceptance speech