In accordance with Article 2 of the constitution of the Praemium Erasmianum Foundation concerning the annual award of one or more prizes to honour individuals or organisations whose contributions in the cultural, social or social science fields have been of outstanding importance to Europe, His Royal Highness Prince Bernhard of the Netherlands confirmed the decision of the Board of the Foundation to award the Praemium Erasmianum for technology and society for the year nineteen eighty seven to Alexander King.

The prize is being awarded to Alexander King 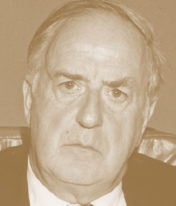