Life always turns out differently than you think. I had come up with a certain beginning for my acceptance speech, but this music has gone straight to my heart. So many old friends, old buddies, to hear such beautiful music being made in the delicate Strauss, in the nostalgic Elgar – such a typically English piece – just one thing after another. Maybe I’ll come back to that a little later. I am extremely grateful for this, for the musical contribution. Music is a marvellous language.

One of my favourite writers, Thomas Mann, once lamented in one of his journals: ‘How is it possible that words of praise vanish so quickly and that words of criticism persist for so long?’. Thomas Mann, Nobel Prize winner, wrote that after he had just completed his masterpiece Dr. Faustus. And so a leading English musician once said to me: “I can’t stand it when my work doesn’t get good reviews in the press; then I have to stay in bed the whole next day’. To which I said: ‘My good man, then I might as well stay in bed for half a year’. These are typical examples of artists, artists who are uncertain, who must doubt themselves. But then where does that image of the conductor as general – from your speech, Your Royal Highness – fit in? Where does that fit in? I think those who know me a little better know that I do not necessarily belong in that category. It is therefore all the more surprising and flattering to be permitted to receive this extremely prestigious Erasmus Prize from your hands, Your Royal Highness. Surprising: when I heard the news, it also brought up – that’s just the way I am – a number of questions. In the first place, the illustrious company in which I would find myself. Did I fit in there? To mention just three names which I admire greatly: Olivier Messiaen, Marguerite Yourcenar and Sir Isaiah Berlin – giants of European culture. I have never thought of myself as such.

Another question which occupied me a long time is: Is a prize for music really not a contradiction? Music is a remarkable art – I said it just a minute ago – it is a kind of secret language. It plays itself out in time; you can’t really pin it down. After the last tones have sounded we are back in the world again, and sometimes even back where we started. We performing musicians are really more or less free targets. Just take a look at the differing opinions in the daily papers after a performance; or listen to what your fellow-listeners have to say during the intermission of a performance: so many different opinions, which often have so much to do with how you yourself feel at such a moment. Music is so extremely complex and has so many different facets. The fleetingness of music: even in what is becoming so enormously popular these days – recordings, phonographic records, compact discs … – but movement remains there nevertheless, even if it is congealed. And in evaluating these recordings, there is a myriad of different insights.

Yes, and what about this conducting business? Is it really so that the conductor wants to be the general who commands the orchestra and takes the public by storm? Or am I – do I want to be – the person who accompanies the musicians and summons up a musical emotion, through which a spark is transferred to the audience? The music lovers among you have all experienced this at one time or another – perhaps too seldom – that moment during a performance when it seems as if time stands still and the world holds its breath for a moment. Yes, and that conductor’s talent; that’s also not so easy to define.

Today is a noteworthy day for me. First of all because of this award, but also because it was exactly 35 years ago to the day, November 6th (it was even a Wednesday) that my first concert took place in the Concertgebouw with the Concertgebouw Orchestra. The orchestra has always been royal, but at that time it didn’t yet have the designation. My apologies, Your Majesty! I still remember the date so well because it was the commemoration of the Hungarian Revolution. I was very glad the audience was requested not to applaud after the performance. I thought: at least I would be spared the meagre applause that my debut would elicit. It was also precisely 35 years ago that a prominent orchestra musician said: ‘That guy knows absolutely nothing, but he is definitely a conductor’. What is remarkable about all this is that this musician, to the best of my knowledge, is sitting here right now in this auditorium. Things are strange sometimes. Indeed, I probably do have a talent to stir something up by means of expression and gestures – without many words. But other character traits, and one needs a lot of them unfortunately, were not all granted me at birth. There are many excellent musicians who feel themselves called to conduct and yet never reach that point where they are able to animate an orchestra and motivate the audience. My musical genesis was guided by typical Dutch sayings and platitudes like ‘make the best of what you’ve got’, ‘one day at a time’, but most of all ‘act normally, you’re already crazy enough’. That was also the first form of salutation at my first rehearsal in Amsterdam. The widely celebrated integrity – with which I am, of course, extremely honoured – also has, I believe, its origin in a sort of inhibition, not wanting to show that which was alive in me; a kind of fear of letting myself go. Sometimes you do that, but then at just the wrong moment.

Why am I standing here after all those years? I think because of a certain obstinacy, because of a certain gift for doing it better the second time than the first time and, preferably, for doing it the third time better than the second time. And through honing my own talent – making the best of what I’ve got – but above all – and always been aware of this, I have always held to the idea, the thought, even in moments perhaps of brief frustration – through working with the same ensemble for more than 25 years in the same auditorium, that orchestra in combination with that hall. People of Amsterdam, you don’t know how lucky you are! That cooperation, that confrontation with the same extremely faithful and extremely critical public, with a critical press, the phonographic recordings in that hall with the same producer, for the same record company, all this has led I think – with all due modesty – to a rather unique situation. That a rather abrupt end came to that rather unique situation – ah, that – and this is how you notice that you’re getting older – is just one of the capricious paths which life suddenly can take. It brought perturbation to many good natures, mine as well, but I think that it is better and more reasonable not to talk about that further. Strangely enough, after the divorce – because that’s what it was – an unbelievably exciting time dawned for me, despite the sombre predictions of many who were in a position to know and also did know. Maybe I had my own grave doubts as well; just look at Thomas Mann. My work at the Royal Opera House Covent Garden, with the recent Ring cycle as culmination, the contacts which were forged with Berlin, the Dresdener Staatskapelle and the Vienna Philharmonic and Boston, and not to forget the memorable commemorative concert in Rotterdam and the heart-warming cooperation with the Rotterdam orchestra, have been priceless experiences for me these past five years. All this had broadened my musical as well as my human horizon enormously. All those musical experiences, among which the confrontation with the problematical work of Richard Wagner, have led to what I really consider to be a kind of musical bodybuilding.

It is no coincidence that most of these activities took place in Europe, in that part of Europe where I feel the presence of tradition so strongly; even Boston is still the most European part of America and the Boston orchestra has the same kind of auditorium as Amsterdam. There are but three really fine auditoriums in the world: Amsterdam, Vienna Musikverein, Boston Symphony Hall. I remember that when I performed Bruckner’s 9th there, I was overcome by a certain nostalgia and had to think of Amsterdam. Talking about tradition, Mahler once said to his dramatist: ‘What you theatre people call tradition is nothing other than your own complacency and sloppiness’. Tradition is reprehensible when it follows well-worn paths out of complacency. If one is really serious, one must always meet tradition according to its new values. The textbook examples at this time are the many authentic currents, going back to how it should have been. As a performer, I believe that you must also see that critically. I am extremely grateful for the work that Harnoncourt and others have done and still do. But I believe that it would be unwise and also complaisant to accept all of that without complaint, granting that one could even do that. I don’t think that one should go along with things that will perhaps be commercially successful just because it’s in fashion. For me tradition is only acceptable when it is presented in a new light.

That musicians from the Royal Concertgebouw Orchestra are present here today and have performed – I’ve already let you know – has moved me more than I can express in words. I am extremely grateful for this. I am also grateful for the fact that a number of these musicians have continually kept in touch with me throughout the years, which I sometimes in my quiet moments call – but without any self-pity – the years of exile. It is very strange to go through life crowned with so many laurels – because a rain of prizes has descended upon me recently, of which the honorary doctorate in Amsterdam and the Erasmus Prize are two high points – and yet to perform so seldom in my own country. The loyalty of the musicians who have kept in touch with me – I have also tried it myself in as discrete a manner as possible – I am also extremely grateful for that. And I have the hunch that through your loyalty a new contact will be realized in the distant future (but ah, life goes by so quickly that the distant future is already approaching swiftly). When a bond can exist again from that contact – but on a very different basis naturally – then it will not be impossible that I will once again become, as far as the Royal Concertgebouw Orchestra is concerned, a very happy man. Having begun a Dutchman, as a Dutchman having developed in the European tradition, it is for me a great honour to have the privilege of accepting this award. I thank you. 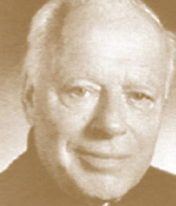