Having said that, I will now turn to the laureates in person. I now turn to Professor Fatema Mernissi.

In the debate about modernisation in Islamic societies, the Moroccan author and sociologist Fatema Mernissi occupies a prominent position. She has made a special effort to study the living conditions of Muslim women and expose their vision of the world. This she considers important both for themselves and for the outside world, which she deems to be one-sidedly permeated by the male discourse.

By publication of her interviews and studies of Moroccan women in various societal positions – studies which have appeared in many languages and countries – she has made the voice heard of what she considers the subjected and discriminated half of the population. By writing in an accessible, evocative style, Fatema Mernissi has reached a very broad audience and has become a role model for younger generations. She argues that women should fulfil their full role in the public sphere. Thanks to her thorough familiarity with Western cultures she is also able to make comparisons with Western views on womanhood and question the pretended Western feeling of superiority. Mernissi emphasises that in the West, too, women are manipulated and exploited, because the female body is often used as a commercialised sex object.

Already in her first books she emphatically pleaded for emancipation of women. Her books, most of which first appeared in English or French, and afterwards in many other translations, have been distributed very widely, especially also in Islamic countries. The special merit of Mernissi is that she has systematically investigated forms of repression of Muslim women, studying them from inside the institute of the harem, and subjected the results to discussion. Her ethnographic descriptions are extraordinary and of priceless value, as the harem she describes does no longer exist in present-day Morocco. In the mid 90s Mernissi broadened the focus of her work to the influence of satellite and internet on society. Through a growing international network entitled ‘Caravane civique’ she is empowering a broad group of artists, activists, intellectuals, as well as illiterate people from remote rural areas in Morocco, with the goal to strengthen civil society. As professor of sociology in Rabat, influential teacher and author, she has greatly helped to raise consciousness of the sort of tensions that come with modernisation. She has become a role model for the modern Moroccan woman, who is open to the values of emancipation, and stands firm in asserting her identity. 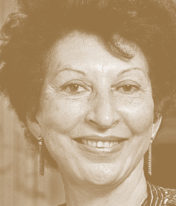